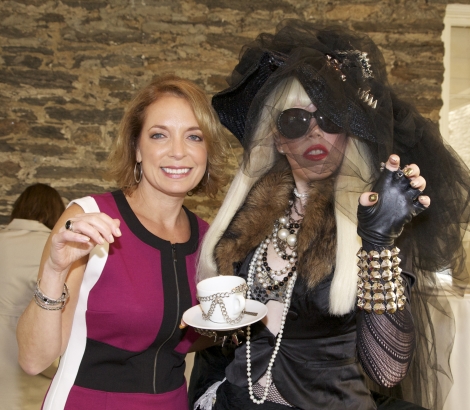 To Jill Prince, her company is more than her family business – it’s her family.

“I would definitely say that growing up as a Prince is like growing up in the Partridge Family,” she says with a laugh.  “Every family occasion always ended up with song and dance.”

Prince’s parents began Hal Prince Orchestras, now Hal Prince Music and Entertainment, back in the 1960s – just a handful of years after they met as performers in the Catskills. Hal, no relation to the theater director Harold “Hal” Prince, played trumpet and Anabel lent her vocal stylings.

“They were ‘Dirty Dancing’ – except they were the musicians and not the dancers,” Prince says. The glam duo rubbed shoulders with the likes of Sammy Davis Jr. and Buddy Hackett, before settling down in Westchester to raise Jill and brother Jay.

To the young Jill, Saturday nights meant mom and dad heading out to perform clad in ball gowns and tuxedos, followed by a post-party play-by-play when they waltzed back in the door. And though weekend time often meant showtime, pretty much every day was a work day.

As Prince reminisces, “We grew up in a household where my mom would answer the telephone in the kitchen while making dinner, ‘Good evening. Hal Prince Orchestras.’”

Prince remembered answering phones, too, as a teen, then heading to college.

“I came right out of college into the family business,” she says. “We renamed it Hal Prince Music and Entertainment, because when I came on board, I started to book other styles of entertainment.”  Once Prince started booking DJs – with her father’s blessing – she carved a niche that prepared her to take over the business with her brother in the ’90s.

Today, Jill and Jay operate out of two office spaces – a chic townhouse in Manhattan’s Murray Hill and a charming Victorian in Mount Kisco that she (most conveniently) shares with Pour Cafe and Wine Bar.

“We never pictured our business to be run out of a corporate building or a corporate park, because we are in a very personalized business,” Prince says. “We’re also creative business, so I like a creative space.” And her clients wouldn’t trade the warmth of her surroundings – or the warmth of Prince herself – for anything.

“They love the fact that both of our offices feel like homes.”

Her environs are only fitting, since still today she embraces colleagues and clients like family.  “It’s actually not unusual for me to stay in touch with them, and meet them for coffee or lunch well after their event. It’s really wonderful to be a part of their happiness.”

Prince masterminds performer bookings, audiovisual elements, scheduling, venue coordination and more for Hal Prince’s renowned Tristate events. And her skill set doesn’t stop at managing expert entertainment. Musical herself, she is also a classically trained pianist who used to tickle the ivories during family sing-alongs. But don’t expect to see her perform onstage – or even at home.

“I don’t play for anyone,” she acknowledges. “But I will play for myself,” turning to a Debussy Arabesque when it’s time to decompress.

As with her piano skills, Prince also prefers to keep her party persona out of the limelight, letting her events and performers speak for themselves. Imagine a Rolodex of world-class aerialists, acrobats, musicians and performers; African drum circles and Harlem children’s choirs; and top Lady Gaga, Joan Rivers and drag queen impersonators galore.

“Not being a performer myself, I love surrounding myself with such talented people,” she says. Constantly seeking top talent and elevating the quality of entertainment is part of how Prince weaves her vocation into the fabric of her identity.

Off the clock, Prince says she happily offers expertise when event chatter rises among girlfriends. Even dining out, this foodie can’t help but scout for offstage talent. She’s even booked chefs from her favorite sushi spot, Haiku.

Though she cherishes her work life – long hours and strong coffee included – her first love remains time spent with family. Her family, and Jay’s, continue the Prince tradition of bringing song and dance to Prince-ly occasions.

A self-proclaimed “Gleek,” Prince joins her teenage daughter for each episode of “Glee” – even reaching über-fandom by hitting the town for “Glee the Musical.” And with her son just off to college, her most treasured times include family togetherness off the grid.

“It’s the only time I disconnect,” she says of skiing in Vermont, or exploring the Italian countryside. “Vacations with my husband Matt, and two children Jordan and Sarah, are sacred to me.”

Thank you so much to Andrea Kennedy at WAG (Where Class Meets Sass) for writing this article!